Music by Tom Kitt
Book and Lyrics by Brian Yorkey

CONTENT WARNING:
This production includes use of adult language and themes.

The Goodmans appear to be a typical American family, yet their lives are anything but normal. This family is about to face the music!

Heartbreaking, humorous and unflinchingly authentic in its examination of a suburban family and how they handle mother’s 16-year battle with bipolar disorder, Next to Normal is a tremendously moving and intimate musical about deeply complicated and flawed human beings and takes audiences into the minds and hearts of each character, presenting their family’s story with love, sympathy and heart.

With a powerful rock music score by Tom Kitt (If/Then, American Idiot, Freaky Friday), and the winner of 3 Tony Awards and the Pulitzer Prize for Drama, Next to Normal is, in the words of The New York Times, “much more than a feel-good musical; it is a feel-everything musical.”

“An honest, truthful story about a family with problems but a whole lot of love for each other& beautiful, artful, deeply moving.” – Chicago Tribune

Immediately following this Sunday’s matinee performance, audience members are invited to stay for a lively panel debate with representatives from our Community Partner – Depression and Bipolar Support Alliance – their associated mental health professionals and members of the Next to Normal cast and crew.
This event is free to ticket holders attending this Sunday’s matinee performance. We look forward to welcoming you.

The program can be found here: N2N Program 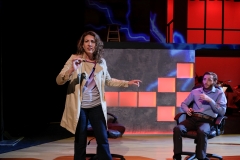 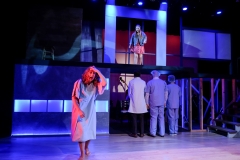 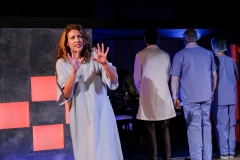 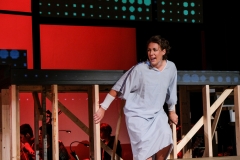 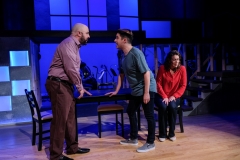 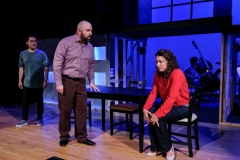 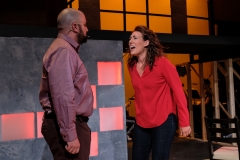 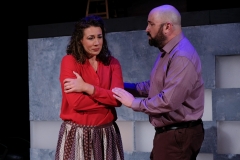 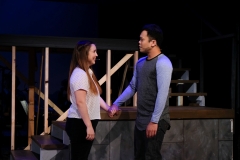 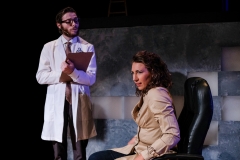 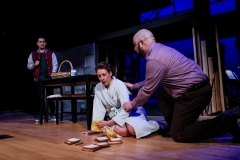 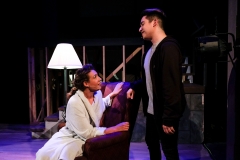 REBEKAH RAWHOUSER (Diana) is thrilled to be making her Coronado debut! Trained in both musical theater and opera, Rebekah most recently appeared as Mary Magdalene in Jesus Christ Superstar in Norfolk, VA. During her ten years as a Chicago resident, she performed in productions such as Candide, Die Fledermaus, H.M.S. Pinafore, The Sorcerer, and The Gondoliers, while also being full-time Mom to three children, and working as a birth doula! Rebekah is extremely grateful for the support of her husband-ever the encourager-and for the opportunity to take part in bringing this incredible show to life here at CPH!

ANTHONY DONOVAN (Dan) was previously seen at CPH in Godspell: In Concert. Other stage credits include The Who’s Tommy and Avenue Q (OB Playhouse), Buddy: The Buddy Holly Story and Spring Awakening (OnStage Playhouse), A Civil War Christmas (Diversionary), Into the Woods (Pickwick Players), A Boy and a Girl (Vista’s Broadway Theatre), Five Course Love (Scripps Ranch Theatre). Thanks to Chad and Martin for the opportunity, this cast, crew, and as always The Usual Suspects.

CHLOE MARCOTTE (Natalie) is thrilled to be back on stage, making her San Diego theatre debut at Coronado Playhouse. Originally from Palm Desert, California, Chloe studied musical theatre at the Idyllwild Arts Academy, before moving to Boston to receive her BFA at Emerson College. Some of her favorite credits include Dorothy in The Wizard of Oz, Maria in West Side Story, Hope Cladwell in Urinetown, and Penny Pingleton in Hairspray. “Love and thanks to Mom, for the endless laughs, tears, and pushing me to never settle, and to Cole for believing in me always, and making our life one big silly-fest.”

MARTIN MARTIARENA (Musical Director) is excited to bring the powerful score of Next to Normal to Coronado Playhouse. Martin is a soon-to-be graduate from the UCLA Herb Alpert School of Music. His credits as music director include shows such as Spring Awakening, Xanadu, and Buddy: The Buddy Holly Story. He can be found playing in many professional pit orchestras around the West Coast with recent shows including Jesus Christ Superstar (Welk), First Date (SDMT), Dogfight (Cygnet) and leading The Rollers, San Diego’s premier Beatles cover band.

JENNIFER McKENNA (Producer) an attorney and lead singer of local classic rock cover band, Event Horizon, is thrilled to be a part of Next to Normal. Producing credits include: King Charles III (CPH), Pygmalion, American Idiot (Patio), The Dresser, 84 Charing Cross Road (Lamplighters), November (Aubrey Award), Coyote on a Fence, Dr. Jekyll & Mr. Hyde, Persuasion, and The Elephant Man (all at OnStage), as well as Lamplighter’s upcoming production of Love/Sick. Additionally, Jennifer can be heard as the voice of Antoinette in the Rex Rivetter: Private Eye podcast (Downstairs Entertainment). Jennifer extends her most sincere thanks to the Chad, Anthony, Vanessa, CPH, the cast and crew for their extraordinary talents and dedication. Love to Miles and, most importantly, Steve Murdock…“you are my heart, my love, my always.” Enjoy the show and ROCK ON!

ANTHONY ZELIG (N2N Associate Producer & Projections Operator; Resident Lighting Operator) is thrilled to be a part of the Coronado Playhouse family and working on this production of Next to Normal. Thank you to Jen for the guidance and for sharing your producing experience and to Chad for being an excellent leader. And thank you to Josh for the continued lighting training and mentoring. Up next, lighting design for A Man of No Importance.

JACOB SAMPSON (Set Designer) is happy to be back at CPH after previously designing Seussical, The 39 Steps and King Charles III. Jacob is a native San Diegan and a graduate of SDSCPA. He received a BFA in theatre arts from Stephens College before moving to NYC where he worked as a properties artisan. Jacob spent two summers with the Santa Fe Opera as a properties carpenter and recently moved back to San Diego to join the prop department at The Old Globe. Thank you for supporting the arts and enjoy the show!

JOSH OLMSTEAD (Lighting Designer) is excited to present his latest Coronado Playhouse lighting design. Thanks to the board and production team for the honor to play with, create, and present this lighting creation! Also thanks to the support team of family, mentors, and friends that has given Josh the opportunity to learn and create in this community. Past favorite designs include: Coronado Playhouse—Fly by Night (2017, Blue Ribbon Award), Hamlet (2016), Frog and Toad (2015, Blue Ribbon Award), and Sleeping Beauty (2014). OB Playhouse—Avenue Q (2016) and Urinetown (2017). OnStage Playhouse—Heathers the Musical (2017).

MICHAEL COOK (Sound Designer & Live Audio Mixer) was introduced to sound and lighting design through his church, where he continues to live mix services every month. Sound and lighting tech and design credits include Seussical: The Musical, A Chorus Line, “Never Say Never” Cabaret, A Holiday Cabaret, Altar Boyz, Showbiz with the Miz, Rayme’s Song Mashups, The 39 Steps, Singing in the Rain: In Concert, The Test: In Concert, Violet: In Concert, The Addams Family (Coronado Playhouse), and Songs from an Unmade Bed (Compulsion Dance Theatre). Michael won the 2017 Aubrey for Lighting Design (shared with Julian Sink) and Sound Design, both for The 39 Steps. Thanks family, friends, and the love of his life Sarah Robinson for their constant love and support.

SARAH ROBINSON (Costume Designer) was born and raised in San Diego, California. She holds Bachelor’s degrees in Theatre and Psychology from UC San Diego and will earn her doctorate in Clinical Psychology this year. Costume credits include: Meet Me in St. Louis, Heaven Can Wait, The Sound of Music, Freedom Train, Company, Who Am I This Time? And Other Conundrums of Love (Vanguard Productions), Altar Boyz, Much Ado About Nothing (Coronado Playhouse), Bedrooms and Boyfriends 2: My Life as a Sitcom (Compulsion Dance Theatre), and The Cat Lady (Tenth Avenue). When she’s not working in theatre you can find her at Disneyland. She is thrilled to continue working with the Coronado family and be part of a show that brings some light to her other passion, mental health. Thanks to God, family and Michael.

JAMES M. (MIKE) McCULLOCK (Projections Designer) Mike’s background in theater spans over thirty years, as well as across the globe. He has worked theatrically up and down the west coast, in New York, Chicago, Canada and seven countries in Europe. He has done everything from acting and directing to set design and construction. He was directing intern for The Old Globe Theatre under the tutelage of such renowned directors as Craig Noel, Sheldon Epps and Tony Award Winner John Rando. He has directed at several local theaters, including Coronado Playhouse. Most recently he worked as an electrician (stage lighting) for the San Diego REPertory Theatre, Cygnet Theatre and The Old Globe Theatre. He has also worked as a scenic carpenter for The La Jolla Playhouse. Currently he heads the Theatre Production Design and Management conservatory at Coronado School of the Arts and is a proud member of the Coronado Playhouse board.

PAMELA EVERETT (Resident Properties Designer) is thrilled to have the opportunity to work with this amazing production staff and cast! Pam has been with CPH for 12 years assisting with too many shows to list. Thank you to my wonderful loving family, Dennis and Amanda for enabling me, putting up with the mess at home and for their assistance in making everything happen.

Celebrate open nights at Coronado Playhouse!
You’re a loyal supporter of The Community’s Theatre and we want to show our appreciation. Playhouse members are invited to a hosted Happy Hour at CPH for drinks and appetizers before every opening night of each new main-stage production. Mingle with fellow theatre lovers and enjoy the ambience and excitement of opening night.
Not a member? Not a problem! Membership starts at just $50 and can be purchased in advance or at the event.

Community Theatre is made by, with and for the community in which it is performed. Coronado Playhouse is committed to pursuing community theatre in the truest sense of the words by giving back to the people of San Diego County and using our public platform to help those in need.

During the run of Next To Normal we are partnering with Depression and Bipolar Support Alliance of San Diego in an effort to bring much needed exposure and donations to this incredible organization.

Depression and Bipolar Support Alliance of San Diego: The mission of DBSA San Diego is to provide hope, help, support, and education to improve the lives of people in San Diego County who are living with mood disorders.